The project that I want to present at the GSA is part of my dissertation, which is titled “Capitalizing on the Avant-Garde? An Analysis of Adversarial Authors’ Marketing Strategies in the Second Half of the 20th Century”. My research examines the establishment of avant-garde authors’ and artists’ public personae in the context of changing structures of the public sphere. In particular, I focus on the self-presentation and promotion of adversarial authors who draw on the ideals of the avant-garde and the artistic critique of capitalism. Such authors are known for their critical stance towards the bourgeois lifestyle and materialist values, an opposition that they express in their works and at times also through their own bohemian identification. Yet these same anti-establishment authors and artists present themselves in the mainstream public sphere and the media, arenas that are highly influenced by the laws of the market. I therefore examine whether these authors’ use of marketing methods and media environments undermines their outsider credibility and the credibility of their work, or, alternatively, how they may have been able to develop strategies of engaging with the media and marketing principles that allow them to remain subversive nonetheless. In particular, I analyze how East German playwright Heiner Müller (1929-1995) presented himself in public and how he was marketed and strategically positioned by his publishing houses, especially by the Suhrkamp Verlag. I draw on his television interviews, public readings, and speeches, as well as on marketing materials such as book covers, blurbs, and press releases by his publishers.

The materials that I will present at the GSA draw on this doctoral work of mine and consist of different graphs and visualizations concerning Heiner Müller’s presence in the German public sphere. I have collected metadata on the publication of his writings (essays, articles, speeches, etc. collected in his Schriften volume) and on the broadcasting of his interviews from the respective volumes of his edited works. Based on this data, I can illustrate the importance of literary awards (Büchnerpreis in West Germany 1985, Nationalpreis 1. Klasse in East Germany 1986) for the expansion of Müller’s public presence, since the amount of interviews and writings he published per year increases significantly after he accepted these two awards (please see the respective PDF files for better perceptibility):

I therefore claim that publicly accepting the aforementioned literary awards and thereby implicitly honoring the cultural authority of the granting institutions was crucial for the establishment of his public persona and for gaining access to the mainstream media.

The data also documents specific changes in Müller’s choice of publication venues for his writings over time. The visualizations that I generated with RAW  allow me to argue that Müller ceased from publishing his essays, articles, and interviews in theater programs – a publication type that he used in the 1960s and 1970s, but that usually only reaches small audiences of actual theatergoers – as soon as he got access to the mainstream media in the late 1980s and the beginning of the 1990s. 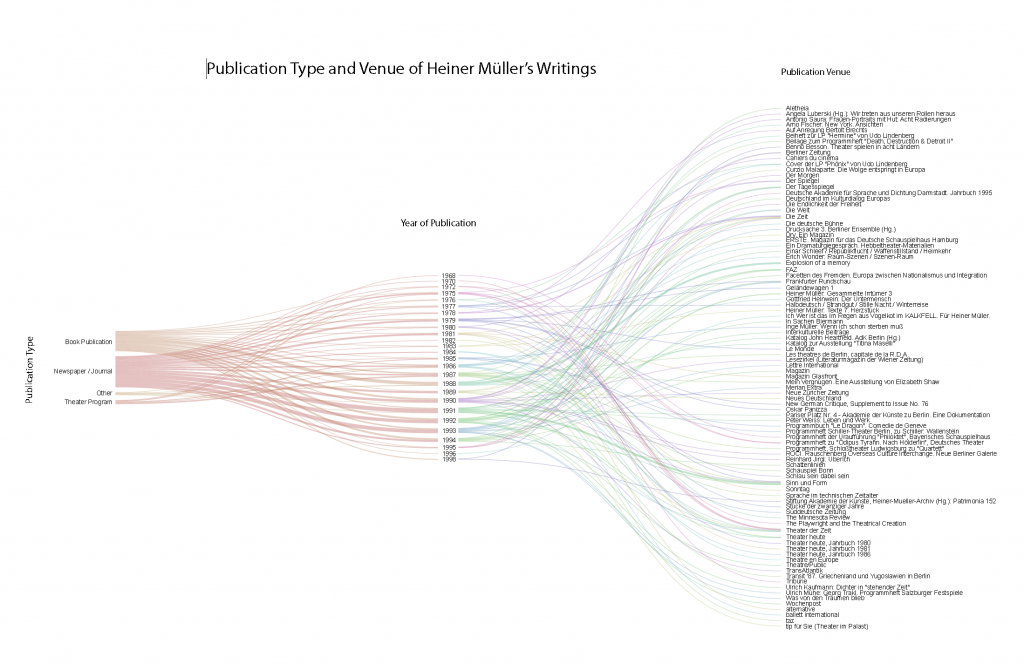 Furthermore, I can show the significance of Müller’s collaboration with Alexander Kluge and Frank M. Raddatz for his experimentation with the interview genre. These two interview partners of his stand out of the array of people Müller did interviews with, since he met them very often and over long periods of time (Graph 4). Kluge and his television production company, DCTP, are moreover absolutely essential for Müller’s presence on television, as Graph 5 highlights:

The process of collecting, refining, and visualizing this data was crucial for making the discoveries that I just mentioned. I had read and analyzed Müller’s interviews and writings before: I had taken notes on specific topics and I had interpreted certain pieces or passages, but only the data driven approach that I present here and the visualizations that I generated based on it allowed me to discover and document the broader patterns that are so critical for my thesis. I personally value this multifaceted research process as a very fruitful combination of traditional methods in the humanities (Hermeneutics, Critical Theory, Close Reading) and data driven DH approaches.

In a second step, I would like to apply some topic modeling and stylometric analysis to Müller’s interviews and writings in order to examine whether I can detect changes in Müller’s style and in the topics he addresses. My assumption is that Müller altered both his writing style and his topics when he began to reach out to more mainstream audiences in the late 1980s.